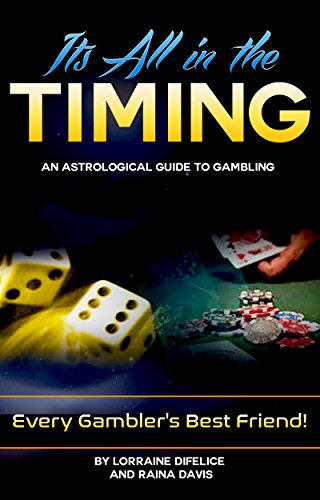 This book is much more than a textbook for gamblers. It is a workbook which contains the basic lessons of Astrology, written to be easily understood by the student of Astrology. It includes several Astrological winning systems for horse-racing, casino gambling, bingo, lottery and other games of chance. Most of all, for the serious gamblers, it contained a system which zeroes in on the nitty-gritty, split-second timing – for those jackpot wins!! Cash in on the secrets of the stars!

An Astrologer for 50 years, Lorraine started studying Astrology in 1956 at age 13. Her father was a gambler in horse-racing, and she noted when he won and lost. The timed studies went beyond gambling to stubbing toes, spilling a drink, indigestion, headaches and more. All these timed events so noticeable in the thousands of charts she made for everyone she met led to tracking timing. She dedicated the last 20 years of her life to helping people find their lucky days down to the minutes!

The professional gambler doesn’t know about these “can’t win” times. Many people know when they have a gut feeling that a big win is coming their way. Many people already know there are certain times of every day when they do better than other times. These people have a special psychic built-in tracking system. They make the best gamblers, but on paper these times show up day after day — why they win when they do. To date, no big win has made that I’ve seen that goes against this system you are about to learn.

Best time of day to play is different for everyone. When the majority of your planets are in the money houses of the location chart—that’s the best time to play on any day, whether you have transits to your chart or not. When your planets are in the location of play chart, they must cross the house cusp to get there, and each one will be in that house for two hours. The best time of play if you should have several transiting planets in money houses. As your planets cross these house cusps going in to the money houses, you have 4 minutes for bigger wins. If you find this time to be, for instance, 3 to 5p.m.—it would also be six hours later, 9 to 11p.m., then again 3 to 5a.m. and 9 to 11a.m. It happens like this because if you win at a certain time, pretty steady for two hours. Playing again six hours later means these planets would be in the same relationship to each other, only six hours away would mean three houses away—a square–the best aspect to gamble on.

Timing is one of the great secrets to winning in life! Gambling Astrology helps you select the best times to take action; whether it’s gambling, investment decisions, buying lottery tickets or initiating any important projects. SAVE MONEY playing on your wintimes and AVOID throwing your money away during your unlucky time! Astrology can improve your odds!