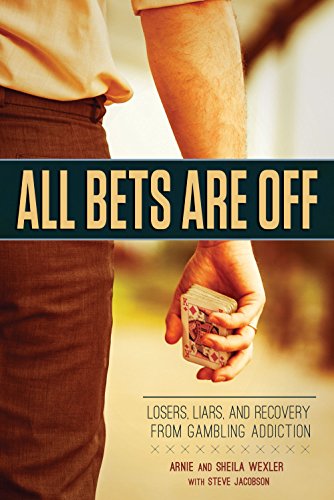 Arnie Wexler’s life as a gambler began on the streets of Brooklyn, New York, flipping cards, shooting marbles, and playing pinball machines. At age fourteen he found the racetrack, a bookie, and started playing the stock market. His obsession with gambling accelerated until a fateful day in 1968 when it all came crashing down.

Wexler’s gripping narrative leads us through the dungeon of a compulsive gambler’s world—chasing the big win and coming up with empty pockets—and how his addiction drove him and his wife, Sheila, to the edge of life. With help, they managed to escape, and together they have devoted themselves to helping others with the problem they know so well.

Arnie and Sheila Wexler have provided extensive training on compulsive, problem, and underage gambling to more than 40,000 gaming employees and have written Responsible Gaming Programs for major gaming companies. In addition to running the toll-free, national helpline 888-LAST-BET, Sheila and Arnie are consultants to Recovery Road in Palm Beach Gardens, Florida, a Sunspire Health private residential treatment facility for adults with chemical dependency and problem gambling.

Steve Jacobson was a sports reporter and columnist for Newsday for more than forty years with a great interest in all aspects of sports. He co-authored a number of books with notable sports personalities. He was named by Associated Press among the top sports columnists and twice was nominated by Newsday for the Pulitzer Prize.